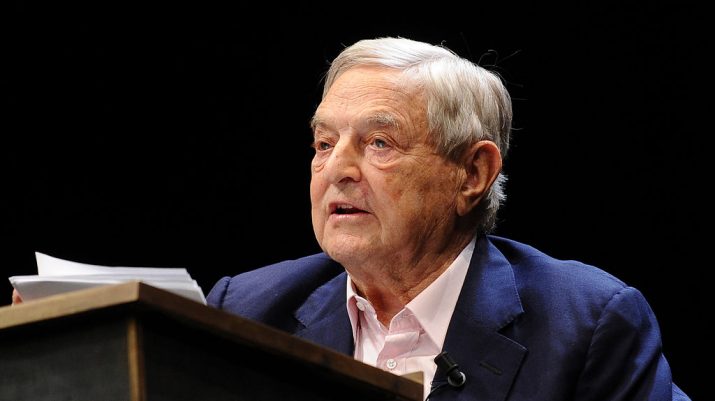 Billionaire investor George Soros, hated by many in his own home country of Hungary because he can’t stop trying to undermine the government there with attempts to usher in fascist socialism, is stepping up his campaign to subjugate the United States and interfere with President Donald J. Trump’s effort to “make America great again.”

In not as many words, Soros said in order to accomplish that, globalist EU types need to figure out a way to continue fooling Europeans into believing that their best interests are served by worldly princelings like himself. Per CNBC:

Such reinvention would have to review the past and explain to European citizens what went wrong and then make proposals to make things right. Soros welcomed a German idea to cut European funds aimed at reducing income inequalities at the regional level for those countries disrespecting the rule of law. Both Hungary and Poland, which are net recipients of the so-called cohesion funds, have been criticized by European institution for their weak standards with regards to the rule of law.

He then lashed out at what has also become a familiar theme to him: Trashing the United States under Trump. Claiming that the Europeans would have to overcome his self-proclaimed “existential crisis” by coming together and fighting back against “hostile powers” like “Putin’s Russia, Erdogan’s Turkey, Sisi’s Egypt and the America that Trump would like to create if he could, but he can’t.” (RELATED: George Soros letter reveals globalist plan to destroy the First World by eliminating national borders with global migrant blitzkreig invasions)

And noting that free people should not be allowed to decide for themselves how they are to be governed, Soros made sure to get his digs in against Britain for leaving the EU.

“Brexit will be an immensely damaging process, harmful to both sides,” he declared — except that it hasn’t been harmful to Britain.

As for the United States, things are going pretty well since Trump won the November election. Wall Street has undergone a tremendous wealth expansion (which hit a record following former FBI Director James Comey’s testimony before the Senate Intelligence Committee Thursday, which tells you that the markets don’t think what he said was damaging at all to the Trump administration) — good news for tens of millions of average Americans’ retirement accounts.

Job growth has been steadily increasing.

A new study describes Trump’s regulatory cuts as “historic,” which will eventually turn into an economic steamroller, especially if he and the GOP Congress can work out corporate and personal tax cuts.

But globalists like Soros oppose any effort by Trump, the British, or anyone else to extricate themselves from byzantine, arcane one-world-order entanglements, arrogantly dismissing moves to restore freedom and liberty as stupid, narrow-minded, “nationalist” and ‘nativist,’ all keywords meant to stoke anger and suspicion among the like-minded.

“The European Union must resist temptation to punish Britain and approach the negotiations in a constructive spirit. It should use Brexit as a catalyst for introducing far-reaching reforms,” Soros told the Brussels Economic Forum.

Translated: ‘We should do all we can to coax Britain back into the fold and find a way to tamp down any further movement by other nations towards independence and the pursuit of national interests.’

In almost every way, though both of them are billionaires, Trump and Soros are polar opposites. While both have relied on capitalism to build vast fortunes, Trump is no hypocrite: His approach to governance is to provide everyone the same opportunities, while Soros seeks to suffocate them while subjugating as many people as possible to iron-fisted, top-down government controlled by just a few elitists….like him.