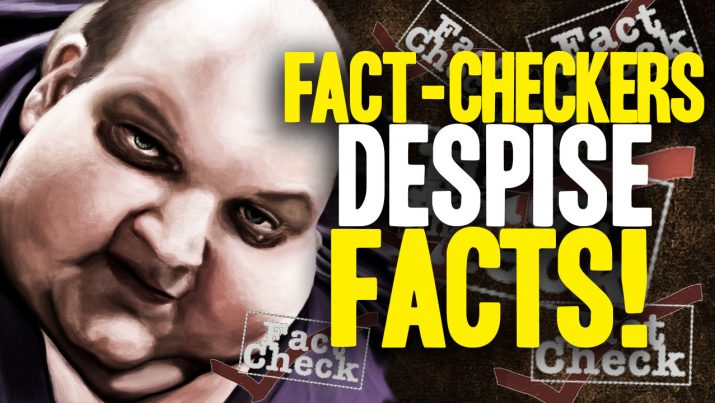 The obsession with fact checking by the untrustworthy mainstream (fakestream) media more often than not simply is a proxy for liberal propagandists to spin information for ideological reasons rather than on the legitimate merits of a story.

Recall that Facebook is partnering with leftist apologists Snopes and Politifact to clamp down on fake news, which generally means news with which those fact checkers disagree or doesn’t comport with their Big Government, socialist agenda. Who will fact check the fact-checking journalists, when they routinely appear to be so incompetent and/or biased? (RELATED: Read more about fake news at Journalism.news.)

With that in mind, consider an essay posted on The Federalist website, in which senior editor Mollie Hemingway identifies four recent examples of how media fact-checking is a miserable failure.

In one instance, President Trump’s nominee as ambassador to Israel called out the Palestinians for failing to end violence after the Oslo Accords. The New York Times and the Associated Press fact check informed readers that “not all Palestinians are the same.” Hemingway noted, “If you are a reader looking for facts to gauge whether terrorism had increased since Oslo, you are completely out of luck.”

In a second instance, Politifact deemed false Sean Hannity’s assertion (which other pundits have mentioned over and over) that the U.S. Court of Appeals for the Ninth Circuit is the most overturned federal appellate court in the country. The Ninth Circuit blocked the implementation of Trump’s temporary travel ban on seven Middle Eastern countries that the Obama administration had classified as high risk.

In its fact check, Politifact failed to properly evaluate the raw numbers on reversals and instead relied on percentages. “From 2010-2015, the Ninth Circuit was overturned at the Supreme Court 77 times. The next highest was the Sixth Circuit, with 28 reversals…PolitiFact continues to be a place where you can say something literally true and get a false rating (if you are a non-liberal),” Hemingway explained.

In a third instance, Snopes weighed in on a story about Planned Parenthood allegedly giving bonuses to employees who pitch abortion services. While rating the allegation “unproven,” Snopes went off on a tangent without checking facts. “But where things got really weird is when the piece used a completely unrelated legal case to discredit one of the women who had made the claim. And then Snopes got the facts wrong on that case…Snopes used Planned Parenthood talking points in an attempt to discredit Sue Thayer. They claimed she was unsuccessful in a lawsuit she brought alleging Medicaid fraud. But the lawsuit is ongoing and was reinstated by the Eighth Circuit.”

Perhaps the most blatant example of fact-checking fraud chronicled in The Federalist piece was the dismissive coverage in the Washington Post about President Trump’s rolling back of an  onerous coal mining regulation. According to the Post, citing an unnamed government report that it accepted at face value, the Obama regulation “actually” would have only resulted in minimal job losses in the mining industry while creating “nearly as many new jobs on the regulatory side.” Whatever that means.

The Federalist indicated that the Trump action saved in the range of 70,000 to 281,000 thousand jobs, the later numbers coming from the National Mining Association. About the Post reporters, Hemingway observed that “Not only do they appeal to a government report they don’t even bother to identify, they put complete trust in it. They trust, with not a smidgen of doubt, that the government that designed a given regulation is the best, if not only, judge of its impact.” She also scolded the Post for drawing an equivalency between coal miners who actually produce something vital for the economy and bureaucratic log rollers.

“In short, that ‘actually’ line may be the stupidest thing I’ve read in a year,” Hemingway concluded about the failed media fact checking.

Separately, here is a classic moment from the 2016 presidential campaign in which a Clinton News Network anchor asks for an immediate fact check and appears disappointed with the result.